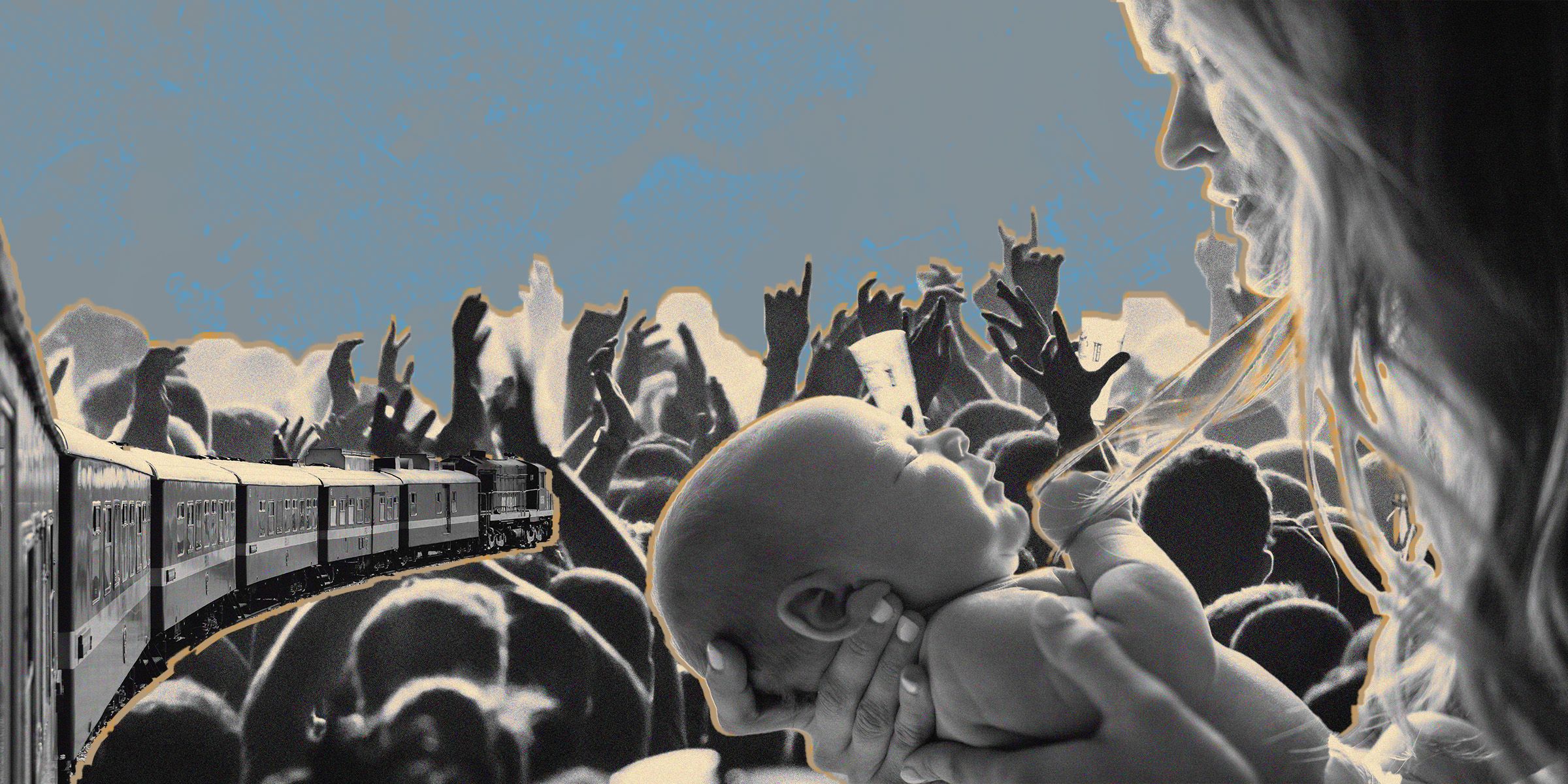 “Look!” I said to my fiancé, showing him the charts on which I had recorded my menstrual cycles. “If my cycles stay the same, we might conceive a baby on our honeymoon!” I was not surprised when he shared my enthusiasm. For in those days, when we were both twenty-one and still months from our wedding date, we were hoping to have ten children.

If I look at my husband’s and my early life plans through the lens of Lyman Stone’s essay on demographic decline, I see clearly that we grew up somewhat outside the mainstream American culture. My entire life I have been surrounded by a community that values the life of every human from conception to natural death, sees the intrinsic value of every person of every color, values the gift of the disabled, fights for the lives of those in the womb, shelters the homeless, and cares for the elderly and sick. The world I grew up in was specifically a Catholic one, that was mindful of the words of Gaudium et Spes from the Second Vatican Council:

[W]hatever is opposed to life itself, such as any type of murder, genocide, abortion, euthanasia or wilful self-destruction, whatever violates the integrity of the human person, such as mutilation, torments inflicted on body or mind, attempts to coerce the will itself; whatever insults human dignity, such as subhuman living conditions, arbitrary imprisonment, deportation, slavery, prostitution, the selling of women and children; as well as disgraceful working conditions, where men are treated as mere tools for profit, rather than as free and responsible persons; all these things and others of their like are infamies indeed. They poison human society, but they do more harm to those who practice them than those who suffer from the injury. Moreover, they are supreme dishonor to the Creator.

If my husband and I had been imbued in the mainstream American culture, what Pope John Paul II called “the culture of death,” we would have never made the plans we did. I am a theologian, not a sociological expert, but I do not think more government programs, such as Stone proposes, would have done anything to change our plans. For my husband and me, it was not the surety of government programs that made us comfortable having babies at twenty-two, with a master’s degree apiece and student loans to pay, living on his graduate student assistantship and my part-time job. We did not even know that we qualified for WIC or the Earned Income Tax Credit until we already had consciously tried to conceive a baby and I was well into the second trimester.

We chose to start a family when we did because we value each individual human life and know that the sexual act’s proper ends include the procreation of children. We understood that it would violate the natural law to interfere with this progression and that our community of relatives and friends would wholeheartedly support us and love our family as we grew. Promoting a culture of life is the true way to combat demographic decline and promote the full, happy lives with lifelong relationships and the joy of children that Stone says all humans desire. And further, with a culture like this, even those who are single or childless, often for reasons outside their control, will have a community of loving support.

A Culture of Life

From my childhood, I heard the words “culture of life,” which Pope John Paul II promoted in his encyclical Evangelium Vitae in 1995. My husband and I both came from families which were already working to foster “a concern to make unconditional respect for human life the foundation of a renewed society.” All four sets of our grandparents were having babies in the 1950s and 60s when many Catholics chose to start using artificial birth control, even after Pope Paul VI definitively stated that it was contrary to the natural law in 1968 in Humanae Vitae. Faithful to the Catholic Church’s teaching on contraception, they all had large families and passed their openness to large families onto their children and even into many of the families of their grandchildren. My husband’s grandparents have over 40 great-grandchildren, and that is even with several of the grandchildren struggling with infertility.

Further, before marriage and since we have been married, my husband and I have found a community of friends through our church, in our homeschool, and now parochial school circles that rejoice with each new pregnancy and sorrow over miscarriage and infertility. Meal trains fill our inboxes, as we support each other through loss and births. Friends swap childcare and carpools. We have dinner parties, church events, and small groups where we build community. And frankly, I cannot imagine raising my family without this support. During the pandemic lockdowns, we all yearned to get together. As soon as our state allowed gatherings of “up to ten” we were getting together with other households, at times exceeding the limit, since we and most of our friends have four or more children. Now that things are basically normal, we rarely have a weekend without some get-together with friends. In our community, we have found a true culture of life.

For All Human Society

Yet, this culture of life is “not for believers alone,” as John Paul II explained. It is for the “whole of human society.” While government programs give some basic material support, our intellectual and emotional needs also need to be met. We need to support and build up the whole human person, and this does not happen in overcrowded WIC office waiting rooms where one’s toddler writhes around on a floor wet from tracked-in snow. The real support I had in those low-income years was from my mom’s friends, who were also beginning their families on tight budgets. Somehow, we all managed to be stay-at-home moms, shopping all the sales, going to thrift stores, and sharing food at our multiple-times-a-week playdates. Our little life-building society made our lives full and rich and helped us have the courage to have more children. We did not go into my husband’s years of graduate school with this built-in support of friends, but we sought it out by attending multiple Catholic parishes and making friends. Our families lived hundreds of miles away from us at the time and still do. Parenting, whether or not we qualified for WIC, would have been hard, but the community we found and helped build has made family life a joy.

To be actively pro-life is to contribute to the renewal of society through the promotion of the common good. It is impossible to further the common good without acknowledging and defending the right to life, upon which all the other inalienable rights of individuals are founded and from which they develop. A society lacks solid foundations when, on the one hand, it asserts values such as the dignity of the person, justice and peace, but then, on the other hand, radically acts to the contrary by allowing or tolerating a variety of ways in which human life is devalued and violated, especially where it is weak or marginalized. Only respect for life can be the foundation and guarantee of the most precious and essential goods of society, such as democracy and peace. There can be no true democracy without a recognition of every person’s dignity and without respect for his or her rights.

The growth of this kind of culture has to start from the ground up. It happens when one individual reaches out to another, when an invitation is sent, when someone braves attending a small group meeting, when a meal is made, or when a neighbor says “hello.” It cannot be government imposed; it has to come from the heart.

As it turned out, my husband and I will not likely make it to the ten children we once desired, for as Stone pointed out, infertility and miscarriage are unexpected and unplanned-for trials. We have four on earth with us and four who passed on within my womb. Even with the advances in natural fertility awareness, we have been unable to carry any more babies out of the first trimester. But despite our “only having four,” we have many friends who have more. And through these growing, large families, I see the culture of life expanding. There is great hope that a culture of life will continue to grow out of the communities that value life from conception to natural death, not just for ourselves but for all humanity.

The “people of life” rejoices in being able to share its commitment with so many others. Thus may the “people for life” constantly grow in number and may a new culture of love and solidarity develop for the true good of the whole of human society.

Mining Investment in Nigeria: Its Benefits and Challenges – Lawyard