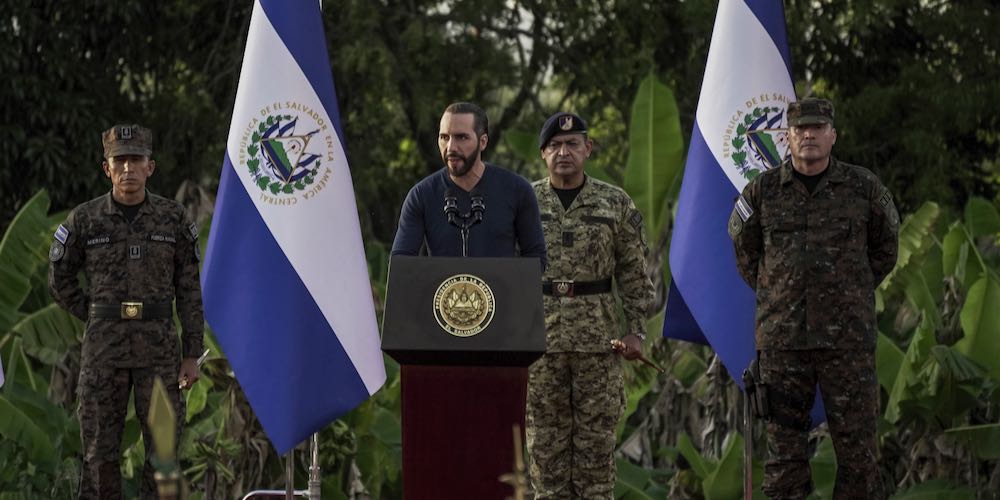 Outside of Latin America, Nayib Bukele is mostly known for his crypto antics. Some always believed he was doomed to fail, and to some he’s the visionary that led El Salvador to become the first country in the world to accept bitcoin as a legal tender.

His recent hour-long interview on Tucker Carlson Today made him even more famous in some conservative circles after Carlson touted his security policy.

“I mean, I’m from El Salvador, a third-world country in Central America, and I see cities here and say I wouldn’t live here. That would be unthinkable three decades ago, that a Salvadoran wouldn’t want to live in a U.S. main city,” Bukele said during the interview.

However, despite his crypto-bro charisma and his apparently successful crime policy, there is much more behind Bukele than Carlson reveals in the interview.

And most of it is very bad. Bukele is hardly a role model for conservatives, for the right, or for anyone—unless you want to become a dictator.

He’s “the coolest dictator in the world,” as his Twitter bio once said.

It all began with popularity. Bukele is, by far, the most popular, democratically elected leader in the world. Independent polls have his local approval rating around 80 or 85%. The explanation is relatively simple: El Salvador went from being one of the most violent countries in the world, absolutely dominated by criminal gangs, to reducing crime by 75%. Bukele promised to end crime and he delivered.

However, Bukele has done much more than just reduce crime. Like most autocrats, he has used his popularity to alter the already-weak Salvadorian institutions in his favor.

Since he got to power in 2019, many in El Salvador warned of Bukele’s true face. But it was on display for all to see in February 2020 when Congress—which he did not control yet—did not want to approve a $109 million loan for his security policy. His solution? Breaking into a Congress session with the military and the police to get what he wanted.

Bukele’s call for a popular insurrection against Parliament (his words, not mine) made him even more popular for being brutally honest with the horribly corrupt, traditional political class in the country. In February 2021, his coalition won 2/3 of the seats in the Legislative Assembly (the country’s unicameral parliament), enabling him to avoid any further standoffs with the legislative branch.

On May 1, the new Parliament controlled by Bukele was sworn in. That very same day, they got to work. They fired the Attorney General, Raúl Melara, who had been investigating Bukele’s government for allegedly reaching agreements with some criminal gangs to reduce crime in the country in exchange for political favors.

The parliament then also passed a law forcing all judges and prosecutors over 60 years of age to retire unless there is a “particular” or “specialty” need approved by the Constitutional Court—a euphemism that allows Bukele to keep his friends on the bench or as prosecutors.

This year, his Parliament passed a law to punish with up to 15 years in prison any journalist who wrote or published anything that might be perceived as an “apology to gangs,” hindering investigative journalists that uncovered Bukele’s links with some gangs in El Salvador. At least 10 journalists have gone into exile since then.

A local outlet called El Faro uncovered that Bukele’s relations with the gangs go back to 2015, when he was running for mayor of San Salvador, the capital of the country. Back then, he gave money to some of these gangs as a part of a negotiation, so they did not boycott the elections.

Then, when he was already president, El Faro revealed (with pictures and videos included) that Carlos Marroquin and Osiris Luna, two top officials of his administration, met with the leaders of three gangs in maximum security prisons. According to the investigation, the gang leaders requested improvement in living conditions in prison, along with benefits for the members of the gang that are not in jail, and in exchange offered to reduce violence across the country. Therefore, his “successful” crime policy comes from negotiating with MS-13, the largest gang in the country.

Riding the wave of discontent with the old political class, and a “successful” security policy, Bukele in just three years as a president has gained control of the three branches of power and paved the way for reelection. His vice president is working on a proposal to reform the Constitution, and it is not hard to predict that the project would seek to concentrate power in the executive branch.

Of course, most of the conservative admirers of Bukele in the U.S. and beyond ignore these inconvenient details. They focus on his cryptobro aura, his security policy, and his opposition to abortion and gay marriage. These are hardly controversial topics in El Salvador, one of the most conservative countries in Latin America, so it is easy for him to hold these positions.

In this view, political power is not an end but a privileged medium to achieve a substantive idea of the common good. Thus, post-liberals generally fear that liberal societies have prioritized procedural concerns (namely, institutions, the “how” we attain the common good) in a way that makes substantive common goods too hard to achieve and excessively restrains the government in its efforts to pursue these political goals. Thus, one of the legitimizing elements (not the only one, but the one that is of interest here) of political power is the pursuit of the common good. Procedural concerns are not unimportant but are not in the first place.

I wonder: which is the common good that Bukele is pursuing that might legitimize his actions? I can hardly think of any. Of course, people in El Salvador are enthusiastic about Bukele because they can feel safer in their cities and the maras are less powerful. But considering the way he has achieved this (by deals with gangs and by putting in jail almost 2% of the adult population of the country), and how he rode the wave of his popularity to unchecked power, it seems that Bukele’s form of security is simply an excuse for him to become an autocrat.

Just as pre-liberal as the idea of the common good is the idea that a just government is a government of laws (both ius and lex), not of the whim of a man. Countries subjected to the whim of a man are tyrannies. And history teaches us that the destiny of these nations is rarely a good one. Just look at the neighboring Nicaragua, Cuba, or Venezuela as other Latin American examples.

There is no substantive vision of the common good in Bukele’s ideology—if he has any respect for natural or written law. He seems to solely believe in the brute use of power for its own sake, to pursue private goods. This is the hallmark of a tyrant.

For example, Bukele himself allegedly received $1.9 million in a shady deal with a Venezuelan food company. At least two police commissionaires have allegedly received money from drug gangs. One of the main points of Bukele’s platform in 2018 was fighting nepotism. Guess what? He indulged in the very same vice he criticized in the old political class: his uncle, Miguel Kattan, is the secretary of Commerce and Investment and his brother, Yamil Bukele, is the president of the National Institute of Sports. His cousin, Guillermo Hasbun, is the president of the International Center of Fairs and Conventions and his sister-in-law, Arena Ortega, is the ambassador in the Special Mission of the Foreign Ministry. Likewise, local media have accused his brothers Karim, Ibrajim, and Yusef, of having significant influence over Bukele’s political decisions and his cabinet, despite having no official posts.

Right now, it is trendy for Bukele to use the conservative label. It gives him free appearances on U.S. networks, and Joe Biden has placed sanctions on his regime, which gives him a free pass with some Republicans. But back when he became mayor of San Salvador, he was a member of the FMLN, the socialist party of the country, from which he was expelled after allegedly insulting a female party official. However, the expulsion was largely attributed to his popularity beyond the party, which helped to launch his career as an outsider.

Socialists call him a conservative and conservatives call him a socialist; the truth is, nobody in Latin America wants to be seen as too close to Bukele. Despite his local popularity, his brand has become toxic. Thus, if he needs to change his political ideology in a few years, he will certainly do it. A tyrant such as Bukele will do whatever it takes to stay in power.

Compared To Income Partners, Equity Biglaw Partners Are Killing It – Above the Law

2nd All India Legal History Congress [Virtual] by TNNLU,Tiruchirappalli [May 21-22]