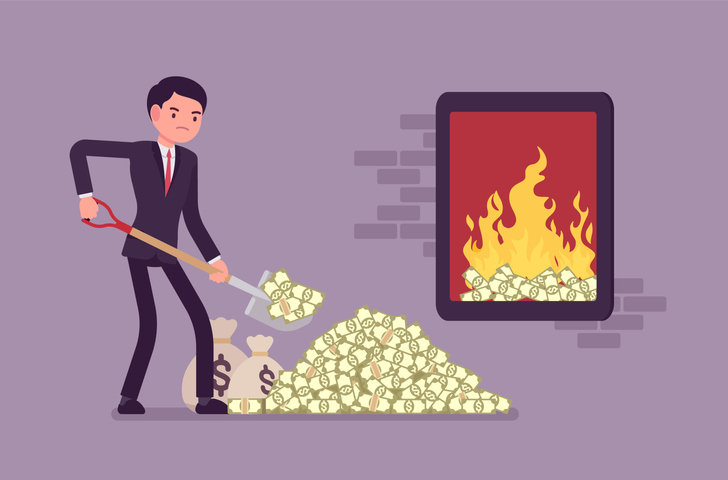 You might suffer from imposter syndrome and feel like you have no idea what you’re doing, but at least you didn’t cost your Biglaw firm $62 million. So you’re doing better than Husch Blackwell partner Charles Renner.

According to reporting by the Kansas City Star, Husch Blackwell found itself on the losing end of an arbitration against engineering firm Burns & McDonnell. The engineering firm blames Husch Blackwell and Renner for losing out on a contract to build the new Kansas City airport, arguing that Renner used his position as outside counsel for the city council to tank Burns & McDonnell’s bid in favor of Edgemoor Infrastructure and Real Estate, a company Renner represented.

But the story gets even messier — that’s because Husch Blackwell and partner Ken Slavens have represented Burns & McDonnell since 1981. In fact, between 2007 and 2017, Husch Blackwell sought conflict of interest waivers 11 different times from Burns & McDonnell, something that weighed in the engineering firm’s favor, according to the arbitration panel.

In 2017, Burns & McDonnell began conversations with city officials about a “sole-source” airport proposal where they would raise the funding for the project — initial projections for the amount of public funding required for the project proved politically untenable — and receive an exclusive contract for the airport. When these behind-closed-door negotiations became public, that’s when Burns & McDonnell says the sabotage began.

When word of a possible deal began to leak, Renner, an attorney specializing in public-private partnerships, pitched his services to Burns & McDonnell. Would their firm be interested in retaining him and Husch Blackwell for the KCI project?

The following day — May 11, 2017 — Renner began pitching council members on hiring him and Husch Blackwell as outside counsel for the city on the airport project. He also offered his opinion that Burns & McDonnell’s no-bid deal would be bad for the city and that it should be opened up for a competitive bid process.

Renner was quoted in a May 12, 2017, KSHB story on the airport proposal and was critical of it. This raised the attention of Burns & McDonnell’s in-house counsel who asked Slavens about it. However, internal documents quoted in the arbitration panel’s decision reveal Renner denied talking to the press about the airport project, writing to Slavens,  “I never spoke to that reporter other than to decline an interview. I have made no comment about the bidding process on this deal to the media at all.”

But that’s not what the documents reveal. In fact, the panel wrote, “Renner intentionally misled Husch’s client about his activities,” because he certainly seemed to have a lot of opinions on the project he was sharing with the press.

Just a few days before, Renner had given a KSHB reporter permission to use a quote he’d previously given to the Business Journal, recommending that the airport project be opened up to more competition. “That quote is from a while back but it is an accurate quote,” Renner wrote in an email to the reporter.

Renner also failed to disclose to Slavens (and ultimately Burns & McDonnell) that he had been emailing information on public-private partnership “best practices” to a Star reporter. These off-the-record communications, which were tacitly skeptical of the Burns & McDonnell plan, had occurred just two hours before Renner’s call with Slavens.

But the press weren’t the only ones getting an earful of Renner’s thoughts on the project.

Nor did Renner mention that he’d spent the past few days expressing skepticism of Burns & McDonnell’s plan to council members, telling them that it was “uniquely lacking,” “bad for the city” and “has more of a ‘back of the napkin’ feel,” according to emails and texts that surfaced during the arbitration dispute.

These actions were particularly noteworthy to the arbitration panel, as they wrote, “There is no dispute that Renner knew that Burns & McDonnell was a client of the Husch law firm. His failure to disclose comments he had made to members of the City Council is a violation of his duty of loyalty to the firm’s client.”

A short time later, Renner and Husch Blackwell were hired by the city (along with WilmerHale) as outside counsel on the airport project.

Two firms working together, Maryland-based Edgemoor and the local firm McCownGordon Construction, also became contenders for the airport job. Renner’s previous work for Edgemoor was disclosed to the city council. The city determined that Renner’s legal entanglement with Edgemoor ended in May 2016, and he could serve as outside counsel on the project without conflict.

But that’s not what the arbitration panel said, “[Renner and Husch] failed to disclose their continued contacts and communications … with executives of Edgemoor and McCownGordon regarding the KCI airport terminal project. Ongoing meetings, dinners, emails and phone conferences occurred throughout all of 2016 and into 2017.”

Though the city opened up the bidding to other firms, Burns & McDonnell initially had the right to match or exceed other proposals. However, Renner convinced the city council to drop that Swiss Challenge provision. He also got the city counsel to extend the deadline to submit proposals, something Edgemoor’s managing director called “good news” in correspondence with Renner.

Renner’s work on both sides of the negotiations — as the city’s outside counsel while at the same time doing work on the airport project for Edgemoor — was in conflict with the firm’s longstanding obligations to Burns & McDonnell.

And in August 2017 — while Renner was serving as counsel for the city — Husch lawyers drafted a term sheet and memorandum of understanding for Edgemoor to design and build the new airport, unbeknownst to Burns & McDonnell.

“While Husch was preparing these documents and billing the city for the legal work, Renner still maintained favoritism and a legal confidential relationship with Edgemoor, all in direct competition with, and adverse to the interest of, Burns & McDonnell in the competitive bid process,” the panel wrote. “This conflict continued and went undisclosed by Renner and Husch. Burns & McDonnell was unaware of the material facts relating to this conflict of interest. The acts described above amount to a separate and ongoing conflict, and breach of Renner and Husch’s duty of loyalty to Burns & McDonnell.”

Edgemoor was awarded the airport contract with members of the city council testifying that they were told by Renner they couldn’t vote for Burns & McDonnell’s proposal since it was out of compliance with city’s master bond ordinance. That master bond ordinance was later amended when it was discovered the winning bid from Edgemoor was out of compliance with it.

Because the dispute was resolved via confidential arbitration, neither party has offered a comment on the case:

The arbitration panel awarded Burns & McDonnell $62 million, which equals the profit they expected if awarded the airport contract.

And professional responsibility law professors were gifted a wild set of facts they can pull hypos out of for years to come.

Kathryn Rubino is a Senior Editor at Above the Law, host of The Jabot podcast, and co-host of Thinking Like A Lawyer. AtL tipsters are the best, so please connect with her. Feel free to email her with any tips, questions, or comments and follow her on Twitter @Kathryn1 or Mastodon @Kathryn1@mastodon.social.

Law School Sent Out 200+ Acceptance Letters To Folks NOT Actually Accepted To The...