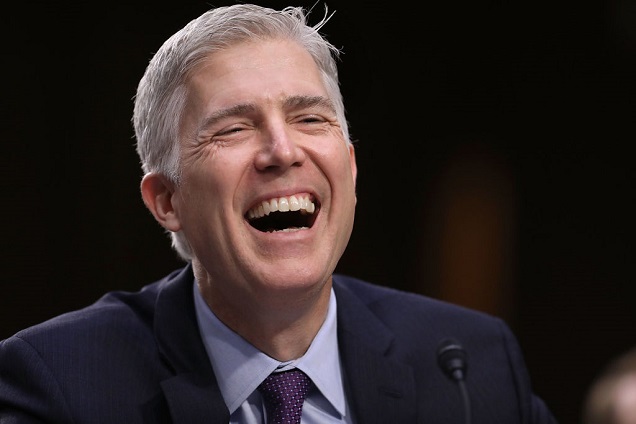 Justice Scalia left a lot of legacies behind him. Mostly precursors of an American hellscape and the degrading of his office by way of childish insults. But he also happened to be a clever writer, sprinkling idiosyncratic terms like “argle-bargle” or “pure applesauce” and “jiggery-pokery” into the wordsmithing he performed deep within the heart of Mount Doom. The jiggery-pokery effort even spawned a fun little hashtag contest back in the day!

And if there’s one thing you can say about the whole Federalist Society superstructure, it’s that they all fancy themselves as the next Scalia and aren’t afraid to think of their opinions as Scalia fan-fic — laboring over exactly what the late justice would say if HE were writing this opinion legalizing stoning gay people.

Since Justice Alito has clearly taken up the mantle of disgracing the institution with insults, Neil Gorsuch had to find his own lane and seems to have landed on eccentric turns of phrase.

This article published in Massachusetts Lawyers Weekly explores all the rhetorical choices of Dobbs and West Virginia v. EPA. The whole piece is interesting, but the analysis happens to reveal that Justice Gorsuch introduced a new concept to the legal landscape.

In his concurring opinion in the same case, Justice Neil M. Gorsuch intriguingly used a phrase that has not appeared in any other reported judicial decision – and that does not quite make sense. He wrote, “[T]he Constitution does not authorize agencies to use pen-and-phone regulations as substitutes for laws passed by the people’s representatives.”

Oh, Chevron it up your ass, Neil.

The new term seems to be a derisive nod directed at President Obama who said “I’ve got a pen, and I’ve got a phone” in response to recalcitrant GOP legislatures. In other words, even though Congress would stymie Obama’s legislative agenda, he still had other limited powers. Gorsuch apparently sees this jab as legalistic red meat for the FedSoc crew.

So Justice Gorsuch invented a new term to cast aspersions on… completely legal activities? Everyone knows about repeating a lie often enough, but just as importantly it’s a lot easier to repeat a lie when you give it a shiny new linguistic coat.

But at least he gets points for saying it first.

Nominate a Woman for LTRC’s 2021 Women of Legal Tech