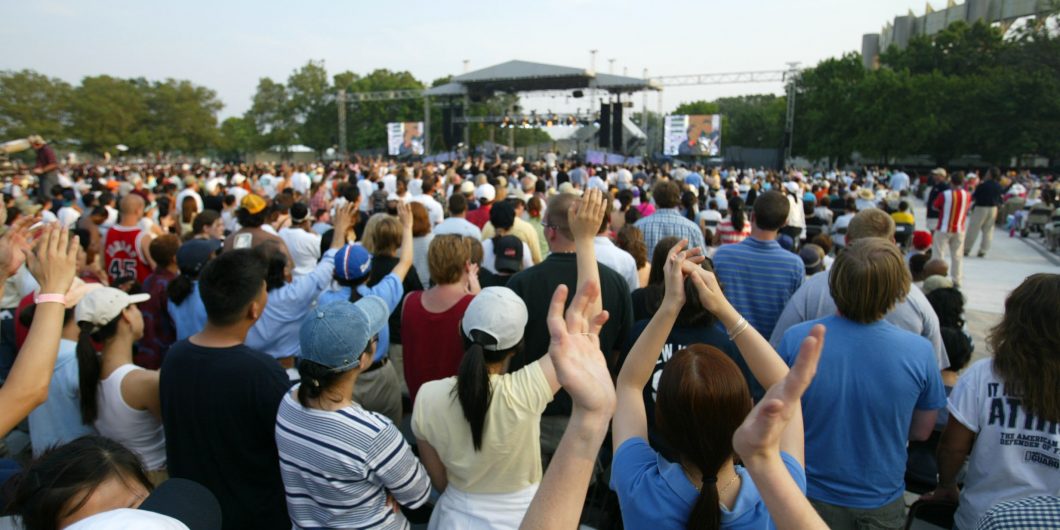 David Hollinger opens his Christianity’s American Fate with an anecdote about arguing—from his liberal Protestant standpoint—about religion with fundamentalist classmates in Southern California. Hollinger eventually left the faith, but we are left with the impression he didn’t do so rancorously. He did so because Christianity in the United States became a hardened conservative religion deeply influenced by fundamentalists, who “constantly invoked Billy Graham” but had never heard of “the missionary doctor Albert Schweitzer, the great hero of my parents and their circle of churchgoers.” At Hollinger’s class graduation, “one Arkansas-born classmate, climaxing four years of more or less genial argumentation,” bid Hollinger farewell by “confidently informing me that people like me ‘will be destroyed at the battle of Armageddon.’”

The thesis of this work, insofar as there is one, is that American Christianity became more conservative at precisely the same time that broader American society became more secular, and secular in this work is unquestionably tied to social liberalization. Hollinger proposes that this is a uniquely American fate, born out of conservative white Evangelicals’ desire to escape the social obligations of the Gospel filtered through an ecumenical mainline Protestantism influenced by the Enlightenment. More specifically, Hollinger argues, Evangelicals hoped to escape the imperative to extend civil equality to nonwhites. “Evangelicalism,” Hollinger claims, “made it easy to avoid the challenges of an ethnoracially diverse society and a scientifically informed culture.” Evangelical numbers, he claims, “swelled during the era of Donald Trump.” And those who “adopted evangelical identity anew had good reason to do so. What they were joining was easily recognized.”

Hollinger rejects arguments from Evangelical scholars who claim that non-religious people identified as Evangelicals and warped the public perception of the movement. “It is a mistake to suppose that evangelicalism has been hijacked by outsiders.” Put simply, Evangelicalism has always been the reactionary, authoritarian, racist mirror image of enlightened, progressive, tolerant mainline Christianity. Evangelicalism’s moment of strength therefore occurred just as the rest of society secularized, because Evangelicalism—whatever that even is (Hollinger leaves it largely undefined)—became the natural home for white conservative reactionaries.

Unique cultural, political, and sociological circumstances, Hollinger argues, made the American republic Protestantism on steroids. Protestantism developed liberal and conservative strands in the nineteenth century, but American Protestants remained somewhat insular. Public life was relatively closed to others until the end of the nineteenth century, when the rising influence of two groups loosened the hold of the Protestant socio-cultural establishment. The first group were American Protestants who interacted benevolently with non-whites and understood the universality of human rights and all the other artifacts of an Enlightened Christianity: American missionaries during the late nineteenth and early twentieth centuries. These missionaries traveled the globe and “bore witness to the humanity of non-Christian and nonwhite peoples. They rejected the notion that nonwhites and non-Christians were heathens in need of conversion. Instead, nonwhites and non-Christians were brothers and sisters. Missionaries “expanded the scope of factual knowledge about the world and also achieved a substantial measure of ‘sentimental education’” that enabled them to have a “greater empathetic identification with previously exotic peoples.”

The second group that confronted Protestant hegemony in the United States were immigrant Jews. Jewish literati, entertainers, politicians, and cultural overserves, whether they intended to or not, all “participated in a demographic challenge to Protestant cultural hegemony.” American Jews represented another cosmopolitanism that made the idea of Christian America—widely shared, according to Hollinger, by both Evangelical and ecumenical and mainline Protestants—“harder to maintain as non-Christians occupied more and more cultural space.”

Jews in this narrative joined with the minority of secularizing post-Protestants like John Dewey to weaken Protestant cultural and intellectual hegemony. American intellectual institutions, even in the late nineteenth century, protected Protestantism from any serious epistemological challenge. Jewish thinkers, more cosmopolitan than Protestants according to Hollinger, combined with secularists to engage works of British and Continental figures who emerged from “cultural settings in which there was no longer a habit of favoring religion of many kinds.”

The combined forces of missionary and Jewish cosmopolitanism loosened Protestantism’s epistemological hold on American intellectual and socio-political life. Missionary influence, however, did not remain static. It boomeranged back to the United States “carrying with it baggage.” The rest of the world was more than a needy expanse in need of American benevolence and supervision: it could inform and teach Protestant America. The initial generation of missionaries, all of whom Hollinger notes, were mostly educated at elite liberal arts colleges. Educated missionary elites were therefore the most likely Protestants to become “cosmopolitan critics of American narrowness.”

The socio-political coalition that eventually enacted the epistemological challenge to Protestantism in the public square was therefore formed out of cosmopolitan liberal Protestants and Jews. The high water mark of liberal Protestantism, argued Hollinger, was the middle of the twentieth century when liberal Protestant institutions and thinkers—examples included Union Seminary and Riverside Church in New York City, Ivy League universities, the YMCA, the Federal Council of Churches, publications like Christian Century, and intellectuals like Reinhold Niebuhr, squared off against Fundamentalists who opposed the modernism of ecumenical cosmopolitan Christianity and who sought to eradicate modernist influences on American Christianity. Hollinger proposes that Fundamentalists joined with rural and small-town mainliners—de-facto Fundamentalists, he infers—and nativist groups to “swell” the ranks of the KKK and nativist rallies during the 1920s.

The 1940s and 1950s proved to be the apotheosis of liberal ecumenical Protestantism. Their influence peaked in academia and in government. But Fundamentalists quickly coopted modern advertising and modern telemedia to soften the public perception of their otherwise supposedly unpalatable views. Hollinger’s taxonomical ambiguity and imprecise associations lead him to claim that Evangelicals would not have become prominent had it not been due to big oil’s influence via funding for Evangelical outreach and major Evangelical figures’ associations with oil moguls. Leaders who identified as Evangelical, such as Carl Henry, Charles Fuller, and most notably Billy Graham simply obfuscated their Fundamentalist beliefs through attractive showmanship and marketing.

Ecumenical Protestant influence waned in the 1960s. Hollinger saw mainline opposition to the Vietnam War and their subsequent sponsorship of the Civil Rights movement as flying in the face of hardened attitudes. Evangelicals took up the mantle of the old racially exclusivist American empire. The book then turns to litigate American religion largely along the lines of the Democratic and Republican parties. This allows the author to arrive at the conclusion that conservative Protestants, and by proxy voters who do not support the ecumenical, enlightened, and liberal policies of the American mainliners, now post-Protestants, are supporting exclusivist and authoritarian politics.

The author has no time for the very idea of religious liberty, especially for religious conservatives. “The democratic process was not compromised when the ‘conscience exemption’ was developed in 1940 to enable individual members of tiny pacificist sects to avoid military proscription,” but the democratic process is compromised when “’religious liberty’ becomes a means for large populations to escape the reach of federal and state laws.” Hollinger scare quotes religious liberty and “sincerely held” when talking about the populations he is specifically referencing, namely, conservative Christians asking to not have to conform to modern innovations regarding sexuality in their businesses and churches. Hollinger terms conservative desire to conform to perceived biblical teaching discrimination against LGBTQ populations and, and denial of women’s rights.

This reviewer appreciates the attempts at scholarly detachment taken by the author. Hollinger informs us that although he left Christianity, he nonetheless retains a feel for it that he hopes informs Christianity’s American Fate. “Although I write now from a secular perspective, I know that I, as a post-Protestant, bring to the historian’s vocation a sensibility that owes much to my Protestant background.” Hollinger’s detachment and sensibility, however, are perhaps not enough to overcome significant weaknesses that inform the book’s thesis and methodology.

The introduction’s reliance on tropes makes the book seem like an intellectual grounding for partisan politics rather than a meaningful scholarly pursuit of the history of religion in the United States. Why, for example, we need to know that the fundamentalist Christian in the author’s high school was from Arkansas seems immaterial, but it leads this reader to think the work is a socio-cultural screed against the population identified by liberal secular Americans as the societal other: conservative southern Protestants.

The credentials and the morally earnest indignancy of the author certainly deserve the reader’s appreciation, but this work is fundamentally flawed by an imprecise and almost cartoonish taxonomy and journalistic and political tropes parading as scholarship. Attributing racism to proto-evangelicals over against enlightened non-racist ecumenical Protestants is so intellectually unverifiable that it is nearly laughable. Mainline Protestants were just as racist as their more conservative counterparts at the end of the nineteenth and beginning of the twentieth centuries. Woodrow Wilson was of course as open-minded as Protestants came in 1900. Influenced by both Darwin and Spencer, he rejected with prejudice conservative Protestant dogma. Nonetheless, he remained a racist.

The author also fails to note the growth of eugenicist thought among the very populations he identifies as the enlightened exemplars of ecumenical Christianity. The book’s attribution of authoritarianism and racism particularly to Evangelicals has very little meaningful scholarly support, because the so-called mainline Christianity of the era proved also to be racist, authoritarian, and exclusivist.

Christianity’s American Fate might have been a meaningful work of intellectual or religious history, but unfortunately it descends quickly into a sociological and political screed. The reviewer admires the political fervor of the author but was left disappointed in his hope for a scholarly look at the development of American religion in the nineteenth and twentieth centuries. It is certainly a topic worth pursuing. Research devoid of socio-religious partisanship, and political partisanship, will be a necessity when a standard work on the subject is finally offered.

6 Things to Know About Making Loans to Grandchildren for College

The Modern Free Exercise Doctrine Is Inconsistent And Dishonest