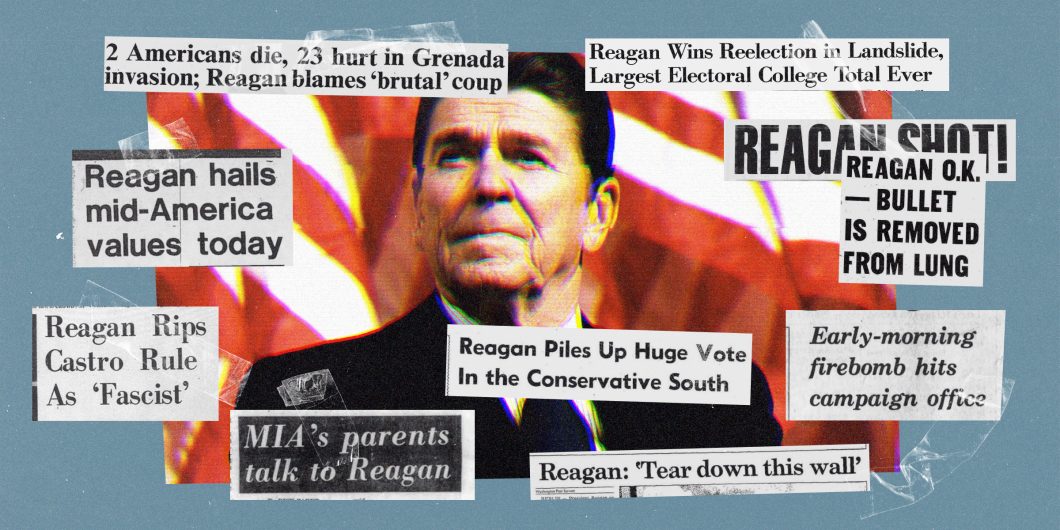 There are many plausible explanations for conservatism’s rise from the ashes of Barry Goldwater’s humiliating defeat, culminating in Ronald Reagan’s landslide Electoral College victories. Was the conservative movement built on racist pushback against the Civil Rights Movement, especially desegregation? Was it a stalking horse for corporate power? Was it a reasonable reaction to the 1960’s counter-culture and rising secularism? A well-deserved rebuke of liberal policy failures? We can find abundant evidence for any of these theses, allowing ideologues to tell almost any story they desire.

Unfortunately for conservatives, few people will have more influence over our collective understanding of conservatism’s rise than Rick Perlstein, an avowed man of the Left. Over the course of 20 years, he has written the most well-known series of books on the conservative movement’s conquest of the Republican Party and its rise to dominance in American political life. Fortunately for all readers, Perlstein is a talented storyteller despite his ideological biases. He is furthermore sufficiently curious to cover his subject from multiple angles, not attributing conservatism’s emergence as a powerful force in American life to a single cause.

Perlstein’s previous books, Before the Storm, Nixonland, and The Invisible Bridge, document the fortunes of conservatism and the Republican Party from the mid-1960s until the mid-1970s. His final book in the series, Reaganland, completes the story, concluding with Reagan’s inauguration. Over the course of these books, Perlstein’s own views became more prominent in the text. In Before the Storm, Perlstein’s disgust for Goldwater and his cause is not especially pronounced; in Reaganland (as in The Invisible Bridge), readers are persistently reminded that conservatives are the bad guys in his story.

Perlstein describes corporate America’s efforts to slash federal regulations. He calls the leaders of these efforts “boardroom Jacobins,” suggesting that they destroyed accommodating relationships between business, labor, and government, relationships that were difficult to build and were among the New Deal era’s crowning achievements. He also gives appropriate attention to Paul Weyrich and others who built the “New Right” into a successful mass movement by focusing on the culture war. Perlstein gives special notice to Anita Bryant and other opponents of gay rights.

As the book covers Jimmy Carter’s presidency and not Reagan’s, its title may seem misleading. Yet Perlstein argues that America’s turn toward the right began before Reagan assumed office. In fact, by the time Reagan entered the White House, he was pushing on an ideological open door. Social conservatives were on the offensive. Deregulation and tax cuts were already in vogue. Thanks to stagflation, the Keynesian economic approach was discredited in the eyes of many elites. Concerns about unemployment and poverty were pushed aside as Carter’s White House treated inflation as the most important economic issue. Soviet aggression and the Iranian Revolution led to a renewed hawkishness in the American electorate.

Perlstein was obviously frustrated by Carter’s halfhearted commitment to progressive values, and he agreed with many of Ted Kennedy’s blistering critiques of the Carter Administration during his failed run for the Democratic nomination in 1980. Conservatives may also have reason to be uncomfortable with this aspect of Carter’s presidency. Conservatives, then and now, have many reasons to be critical of Jimmy Carter. Yet, as president, Carter exhibited what can only be called a conservative temperament. Carter believed in limits, of Americans living within their means–a belief that extended to the government. Although a patriot, Carter was not a crusading champion of American exceptionalism. In terms of disposition, Carter was, in some important ways, more conservative than Reagan ever was. Reagan’s unassailable optimism may have been a virtue, but it was not necessarily a conservative virtue.

Readers across the partisan divide will search Reaganland for evidence that we can draw a straight line from Reagan to Trump. Indeed, Trump and his future allies make occasional appearances throughout the text. Perlstein introduces readers to Roger Stone and Paul Manafort during their salad days. We are reminded of the times Reagan promised to “make America great Again.” Perlstein notes Reagan’s willingness to bend the truth in service of a compelling narrative–as well as Reagan’s understanding that even blatant lies are rarely punished by voters.

We see additional continuities. Even Trump’s most avid fans should not defend the awful, deceitful fundraising text messages and e-mails his campaign circulated throughout 2020 (From my inbox last year: “The president has even requested that we set aside some time so that the two of you can take a photo together.”). Trump fundraisers were shameless in their quest to con elderly conservatives into signing up for recurring donations.  Although the technology has changed, and the text is a bit more ham-fisted, Trump’s fundraisers were not sui generis. Perlstein notes that Richard Viguerie, an effective New Right organizer and the founding father of conservative junk mail, was a visionary when it came to hyperbolic, dishonest fundraising pitches (From a Viguerie letter: “We must stop these villains from seizing total control of our elections.”)

Although some commentators on the Left (including Perlstein) want to view Reagan as a kind of proto-Trump, Reaganland demonstrates that the two had different policy agendas. This is most apparent in Reagan’s views on immigration. In 1980, Reagan was calling for a kind of North American Union, “in which the peoples and commerce of its three strong countries flow more freely across their present borders than they do today.” George H.W. Bush would later be attacked as a “globalist,” yet the term also applied to Reagan, who eventually signed legislation legalizing millions of undocumented immigrants.

Reagan’s immigration enthusiasm was partly driven by economic considerations, especially the demand for cheap labor. This is not the entire story, however. Reagan’s immigration views make more sense when we remember his single-minded obsession with the Cold War. Immigrants, especially refugees from countries like Cuba, provided, in his view, tangible evidence that the American system was superior to its communist alternative. And given Reagan’s belief that the American way of life was simply irresistible, he seems to have had few concerns about cultural assimilation. We unfortunately cannot know how Reagan would have felt about immigration in a post-Cold War context, though it is hard to believe he would have turned toward nativism had Alzheimer’s not prematurely removed him from public life.

Perlstein repeatedly argues that well-meaning but hapless liberals were routinely outmaneuvered by clever, duplicitous right-wingers, consistently operating in bad faith. Most conservatives will understandably reject this interpretation. Nonetheless, although we can debate about and compare the moral qualities of conservatives of yesterday and today, Reaganland shows that conservatives’ political acumen has atrophied over the last four decades. Whatever their other virtues, few would describe this generation’s conservative activists and organizers as brilliant political tacticians. Charlie Kirk seems likable enough, but Turning Point USA and similar contemporary groups will probably have a negligible effect on U.S. politics.

Although he views their triumph in 1980 as a tragedy, Perlstein exhibits a certain admiration for his subjects, for good reason. Weyrich, Phyllis Schlafly, Francis Schaefer, and Jerry Falwell were exceptional figures in American politics. Their role in creating an ecumenical Christian Right, shaking Protestant fundamentalists from their lingering political quietism, undermining their personal fondness for Jimmy Carter, and persuading them to be co-belligerents with Catholics and conservative Jews in a partisan culture war, was a remarkable accomplishment. It is of course a separate question whether, in the long run, tying the fortunes of evangelical Christianity to the fortunes of the Republican Party was a prudent move for either group.

The traditionalists of the late 1970s were exceptional organizers with a coherent ideology and a legislative agenda. Their surprise defeat of the Equal Rights Amendment was among of the 20th century’s most impressive feats of grassroots activism. The rise of a broad-based pro-life movement (opposition to abortion was once a niche Catholic issue) was similarly impressive, although their dream of overturning Roe was unfulfilled. In contrast, although Trump received a remarkable share of the white evangelical vote in 2016 and 2020, no one would call the Trump era a golden age of conservative Christian activism.

Unlike Trump, Reagan was a long-time true believer in the conservative cause. Although he often got the facts wrong in his speeches, broadcasts, and interviews, Reagan genuinely believed in his conservative message, in America’s goodness, and that Soviet aggression was an existential threat to the United States. He was a sincere culture warrior and economic supply-sider. As a governor and a president, Reagan was not always a consistent champion of these values, and, as historian Marcus Witcher demonstrated, the conservative movement was often extremely critical of him while he was in office. Nonetheless, Reagan’s status as a principled conservative was key to his personal sense of identity–for better or for worse. Trump, in contrast, has never been bound by ideological constraints.

Perlstein correctly pointed out that, although the political mood in 1980 was favorable for a candidate and movement offering change, the Right triumphed at the ballot box without first persuading the public to support right-wing policies. Then, as now, economic conservatism (other than the always-in-style tax cuts) was not popular among the mass public. Cultural backlash against the Left was a critical element of Reagan’s rise, as it was for Trump.

The conservative organizers discussed in Reaganland realized that fighting the culture war–not soporific discussions about banking deregulation–was the key to Republican victories. Subsequent conservatives have clearly learned this lesson, perhaps too well. At its worst, today’s right-wing is a perpetual outrage machine, ginning up anger over superficial issues that will be forgotten in a news cycle (Dr. Seuss getting “cancelled,” trans women in Olympic weightlifting, etc.), yet never accomplishing anything. At least on social issues, conservatives have failed to achieve a meaningful legislative victory at the national level for a surprisingly long time. Perhaps it is time for conservatives to rethink their model of activism.

Reaganland is not the most compelling book in Perlstein’s series. This is largely because, for all his virtues, Ronald Reagan was simply less interesting as a person than Richard Nixon. Although the claim that Reagan was an “amiable dunce” was unfair, he did lack Nixon’s ruthlessness and intellectual horsepower. Now that decades have passed since he left office in disgrace, fair-minded people of all political persuasions can appreciate the tragic, enigmatic aspects of Nixon’s political life. Reagan, despite possessing an improbable biography that included years in Hollywood, was, at his core, a square. Even his divorce, a personal detail that, at the time, was unique among American presidents, was a boring story.

At more than 1,100 pages, Reaganland is the longest book of the series, arguably longer than it needed to be. Perlstein thinks that trends in popular culture tell us something important about social mood and political culture. As a result, he treats readers to long discussions of Star Wars and Superman. For readers unconvinced that there is a connection between America’s love for Christopher Reeve and its enthusiasm for Reagan, these passages make an already lengthy book feel interminable.

Several conservative historians have complained about Perlstein’s scholarship, denouncing him as biased and dishonest. Conservatives who lived through the events Perlstein describes have argued that his books mischaracterize what happened. Books on Reagan and his era by conservatives unfortunately have shortcomings of their own, often veering into hagiography. Perlstein’s work should not be considered the last word on a fascinating and important era of American political history. In the absence of a truly dispassionate, fair-minded, comprehensive, and readable book on the subject, however, Perlstein’s work represents a valuable contribution to our understanding of the era, and he deserves wide readership across the political spectrum.